Sometimes I like to remind myself of how far I’ve come. As a girl who suffered a lot of body issue struggles during her teen years, I am so excited and thrilled to announce I’m on a cover of a magazine. If I could talk to the insecure and shy teenager that I was and tell her that, in 10 years time, she would be on a cover of a magazine, things could have gone slightly different.

END_OF_DOCUMENT_TOKEN_TO_BE_REPLACED

Some of you might have noticed that my blog is slightly different. The thing is…I have a new blog header! And by the super lovely Alice Negri, a very talented illustrator from Italy.

I met Alice in 2015 through Instagram, where I discovered her illustrations inspired by vintage girls from all over the world. She even drew me taking inspiration from some recent pictures featured on my Instagram. 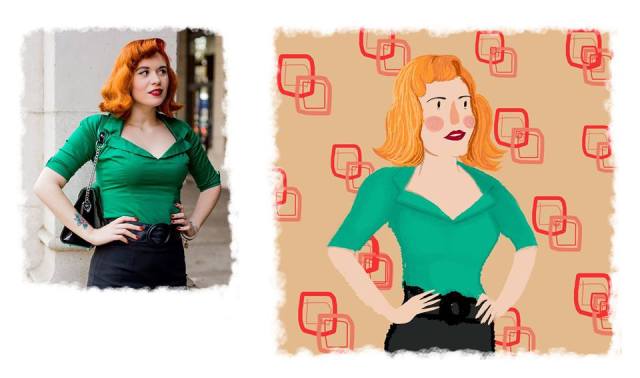 Her style is very neat and elegant, and uses many colours for her compositions. No doubt I had to ask her to design my new blog header. I love its tiki design and tropical vibes. I’m a big fan of the tiki culture and aesthetics, and she created this beautiful header for my blog. Couldn’t be happier!

Since I started this blog, back in late 2014, many things have changed: my style, my experience and also my community of blog readers…and the list could go on! So I guess it was time for a big makeover! I also plan on making other design changes during this year. Stay tuned! ✌

Alice Negri has her own site where you can commission her and buy her art, either prints, pillows, phone cases or even brooches.

What do you think of my new header?
xx

Following this week’s Beach babes in October, today I’m showing you more pics from a shoot with Patricia von Gray, make up artist Montse Fuentes and photographer Artsobu. After our beach session we had a photoshoot nearby with incredible backgrounds.

END_OF_DOCUMENT_TOKEN_TO_BE_REPLACED

Can you tell these photos were taken in October?
A couple of weekends ago photographer Artsobu took these spectacular and yet fun photos of Patricia von Gray and me at the beach.
END_OF_DOCUMENT_TOKEN_TO_BE_REPLACED 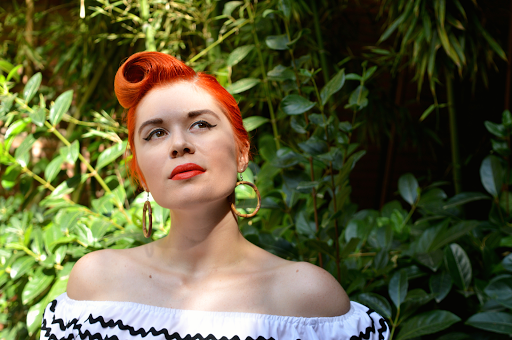 Hello! September is here, and that means that autumn is just around the corner. I have to admit that although Summer is perfect to wear more colorful dresses, I’m really excited for Autumn.
Today I’m showing you some of my latest acquisitions, a match made in heaven and perfect for the last days of Summer.

Last month I did my first ever Vivien of Holloway purchase, and got their Gypsy Top in white. And I gotta say it has become one of my favourite tops ever! It is very comfortable and looks great with a mexican inspired skirt, a pair of shorts or even capri pants. Here I paired it with the Collectif Clothing Ayana gingham shorts, which I won at a recent giveaway they held on Facebook.
Outfit Details
Top – Vivien of Holloway
Shorts – Collectif Clothing
Bag – Sunjellies
Shoes – Lluis Ponts Barcelona
Accesories – Vintage

I have no words for their Ayana gingham shorts, seriously. It’s been years since I finally decided to wear shorts again. I’ve never liked my thighs and had low self-esteem about this part of my body, but after trying these shorts I feel more confident in my body. Summer calls for colorful accessories, so I styled my look with a Sunjellies bag I won recently. It’s perfect! 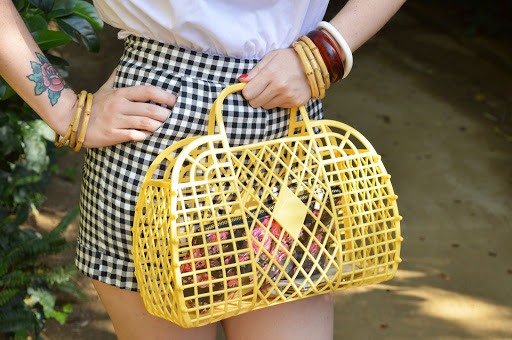 My hairstyling skills are getting better each day. Tried a suicide roll after time practicing and I’m amazed by the result! 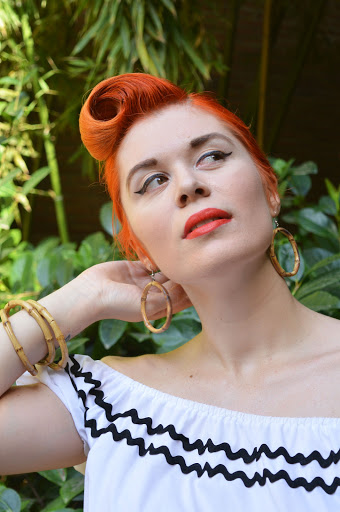 Hope you liked my post!
All photos by David Durand
xx

With June nearly coming to its end, I guess it’s time to review this year’s Screamin’ Festival. This year it’s been my second time there, and I have to admit that it gets better with age hehe
Got to hang out by the beach, with splendid weather – despite the early morning clouds on Saturday – and met really nice people.

This year we couldn’t make it to the whole festival but visited Calella on Saturday for their free car show and flea market. One can find beautiful bargains there! 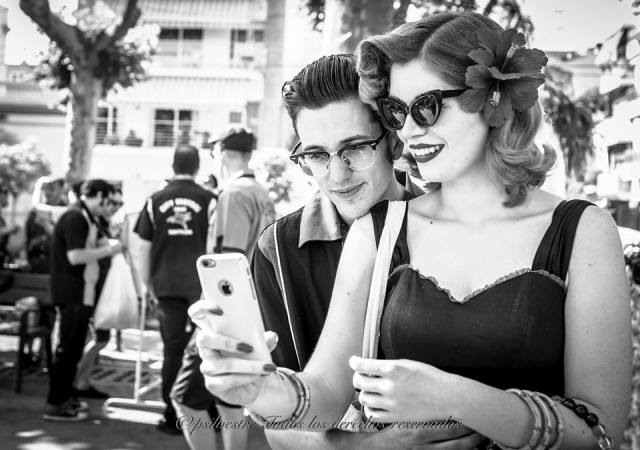 Also met two wonderful friends who happen to own the same car as my boyfriend. We had so much fun! 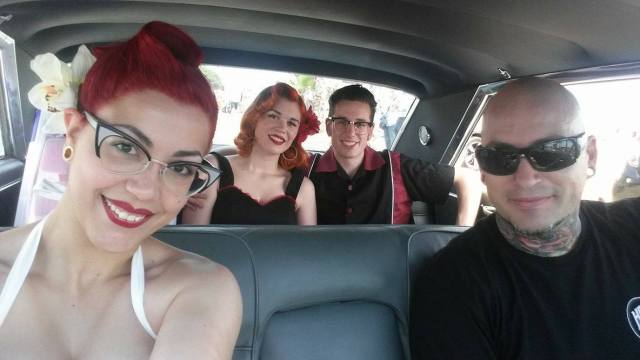 The flea market on Saturday also had live music, brought to us by The Kabooms. This Spanish rockabilly band is awesome and apart from playing in Calella they also play in other countries. Don’t miss these guys out! 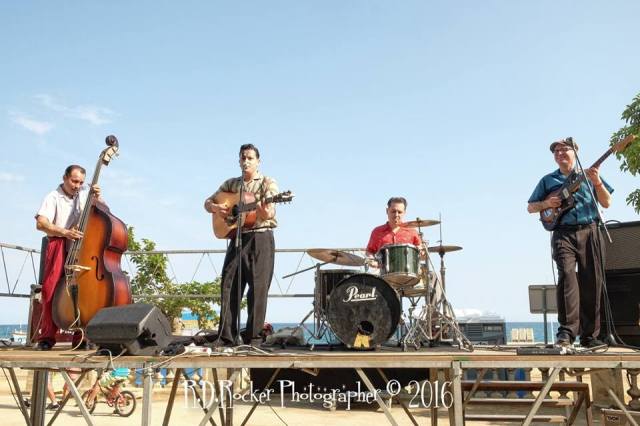 Really looking forward to next year’s Screamin’ Festival. I decided to wear the Señorita dress from Pin up Girl Clothing, Tommy Hilfiger wedges and a Lady Luck’s Hair flower. 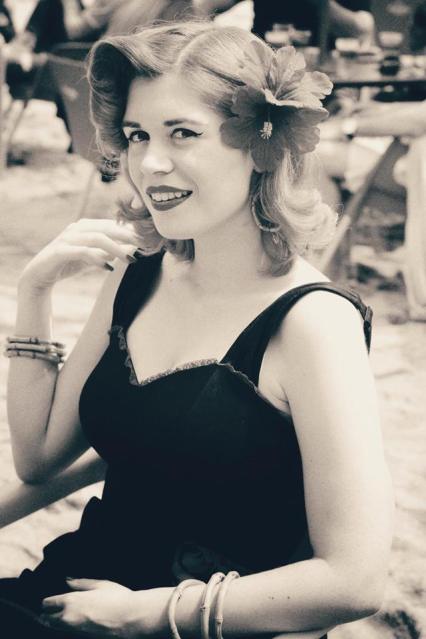 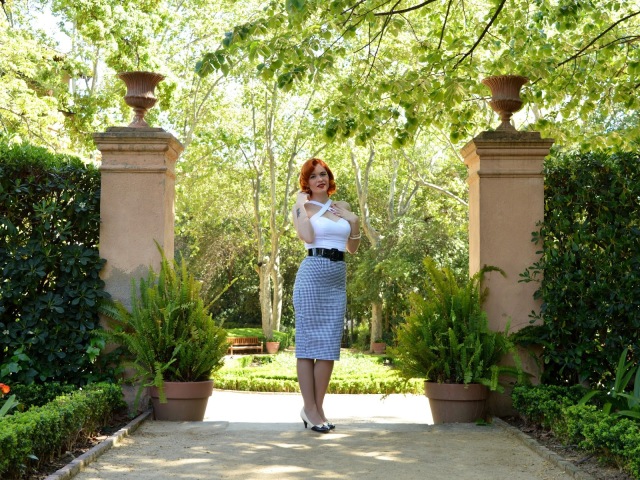 Another week passing by, and really looking forward to the weekend and warmer weather!
How’s the week going? Mine is going to be shorter because I have a day off on Friday – just in time for the Riverside Crazy Car Hop -!

Today I am showing you all a shoot I did last week in the city. The weather was incredibly nice and I got to wear for the first time this houndstooth pencil skirt from Bettie Page Clothing. Don’t confuse the brand with Tatyana!

I got this skirt at Goldie’s Clothing 1st Vintage Market, where everyone could buy and sell vintage clothes surrounded by cool people, music and drinks. I decided to style this skirt with my new Voodoo Vixen top from Pinup Girl Clothing. Seriously, the best top ever made! And this skirt is so comfortable that I could wear it all day long! 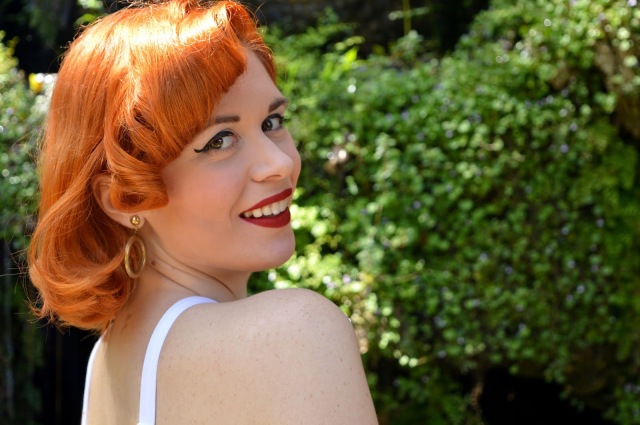 Last month I did a guest post for Hard Headed Women, a blog in spanish about feminism, vintage aesthetics and other stuff. So I decided to post about it in English for my foreign readers!
As someone who dresses and looks like it has stepped out of a movie set, I often get told “to be 100% authentic, you shouldn’t be using a phone”. The other day I read in the news about a british woman who lives in a house from the late 30s and keeps everything as if it still were 1939. I got really annoyed after seeing rude comments of users criticising her. What’s wrong about wanting to live in the past but also being part of the 21st century?

Personally and Professionally speaking, I love social media, and I’m a daily and avid user of them. I can’t live without Facebook, Instagram and other social networks. And I like to dress vintage inspired because that’s how I want to dress and look like. I hope to live in a midcentury house someday, own a tiki room for myself and hope tht my boyfriend will drive a Cadillac in the future. Does that make me old fashioned and too old to post on social media? Of course not.
Internet has played a key role in my life. Thanks to Instagram and Facebook I found that there were girls that, just like me, are fascinated by past decades and aim to dress like that everyday. The Rockabilly and Vintage Scene is huge thanks to social media and digital groups created to gather enthusiasts from all parts of the world.

I’m sick of hearing nasty comments about my appearance and the way I use social media. And I’m sure that those of you who have also been told these things have also heard comments regarding feminism. I know that women and other collectives had less rights back in the day, but because I dress like someone from the 1950s that doesn’t make me racist nor sexist. Wish people knew before judging.

Hello lovelies! It’s been nearly a month since my last blog post.
And today I’m showing you the Goldie’s Clothing Spring Summer 2016 Collection, which was shot a month ago in a beautiful park in Barcelona. Yes, that is Barcelona, although it looks like it’s Mexico or any other exotic place. 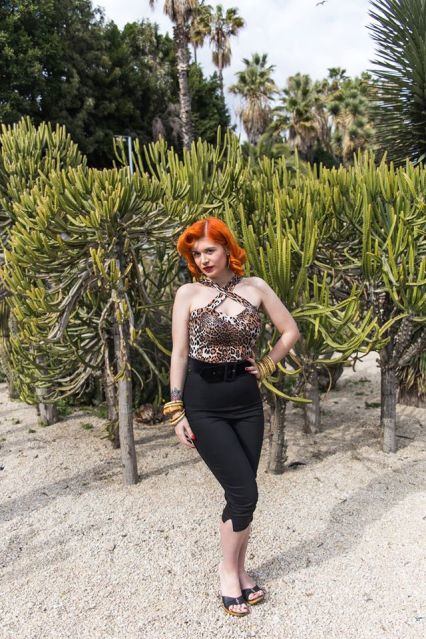 All photos were taken by talented photographer and Instagram pal Patricia von Gray, and the whole collection is now available at Goldie’s Clothing website. 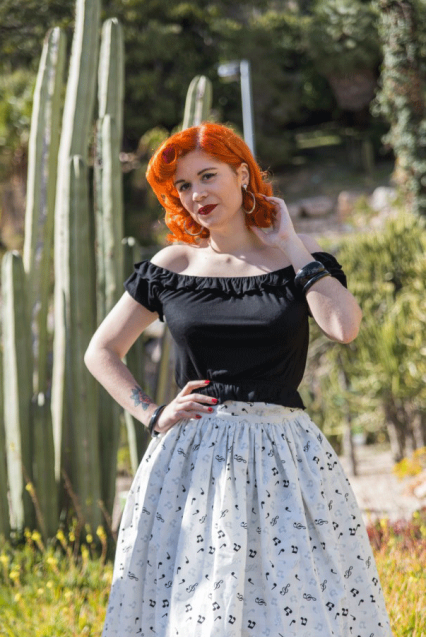 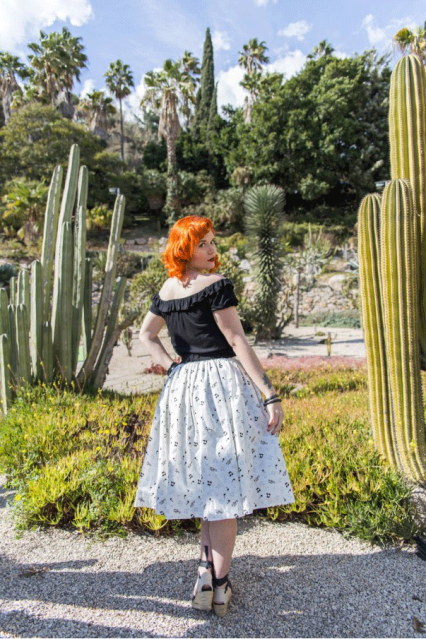 All photos by Patricia von Gray.

Today I’ve decided to blog about Rockabilly Festivals in Spain. Some time ago I was asked about the culture here in my country. The Rockabilly and Kustom Culture scene is very popular in the United States and in the United Kingdom, and in Spain as well.
And since in a month or so I’ll be dancing and having fun at the Riverside Crazy Car Hop, here are some of the best festivals in the country.
(in order of dates)
Rockin’ Race Jamboree: early February in Málaga
Ubangi Somp Festival: mid April in Benidorm
Riverside Crazy Car Hop: late April/early May in Calafell
Screamin’ Rockabilly Weekender: early/mid June in Calella
Psychobilly Meeting: early July in Pineda de Mar
Rustic Oval Weekend: late July in Balaguer
High Rockabilly: early September in Calafell
The scene is really alive in Spain, especially in Catalunya, up north. 5 from above are in the area, so why not consider paying us a visit in the following months? I really can’t wait to attend some of these festivals this 2016. It’s going to be a blast!

Flea markets, car shows, DJs, live music…The party has just started!
Photo by Didier Jacquet
Apologies if I have missed any. Feel free to comment your favorites! ❤
Follow The Sixties Twist on WordPress.com