Last post of my Bathing Beauties series: the 60s!
Last weekend of August, gosh!
It’s quite hot in here, though, so beach season is not over yet where I live.
The 60s were the years of the bikini. It was a huge success from the very first moment it came out. Women would no longer have to cover all their bodies and could sunbath more effectively. Being tanned would soon become hip, especially in the mid 60s and early 70s.
Probably the most famous shot from the James Bond series in the 60s is the iconic pic of Ursula Andress on a white bikini.
In the States, young people in the East Coast were often seen with surf boards and riding vans, which later would become part of the hippie movement.
Enjoy the pics!
x

Ah, the 50s! Fabulous days in the sun, huh? Back when people didn’t have smartphones and electronic devices, beach days were filled with photographers, sufers and young couples often accompanied by friends (at least in Spain, where unmarried couples were often watched over to ensure they wouldn’t do inappropiate things).
In the mid 40s a new type of swimwear came out: shorter swimsuits and two pieced suits would soon hit the beaches, especially in the 50s. Women would no longer be afraid of showing off their bodies, and the popularity of the two pieced bathing suit (which later on would evolve into the bikini) encouraged more women to go to the beach to get a tan.

Those were the days! No worries, just fun in the sun 🙂

We are nearly in the middle of August and I haven’t talked about the glamorous 1930s and 1940s in terms of beach fashion! How is that possible?
In the 30s, bathing suits were shorter and often would be combined with wide pants, head scarfs or even capes. Fashion got more sophisticated, and women would bring the coolest garments to pool parties and summer events.
Years later, in the 1940s, the sophisticated look popular in the 30s came along with shorter dresses, as well as oriental and tiki inspired patterns. Floral accessories and head scarves would also be a trend back in the day, especially in outdoor places. The classic pin up look would soon pop out, with young starlets such as Marilyn Monroe and Rita Hayworth on their “bikinis” posing for photographers right in from of the sea.
I really hope you are enjoying the holidays in the sun!
x

One of the most iconic decades in the 20th century were the 1920s, also known as The Roaring Twenties. During those years, women started wearing shorter skirts and dresses, and swimwear followed the trend too. Police officers had to ensure, back in the day, that young girls – who would be called flappers – wore decent swimwear to the beach or public spots.
The daring ones would often get arrested if their suits were too short, and even police officers would measure the length of their clothing to ensure they were “prude” and “not sinful”.
The 1920s were very conservative, but soon a group of young women started breaking the rules of fashion and social trends by wearing provocative garments and being themselves.

– I really hope you are all enjoying the holidays, and excuse the lack of activity on here, I have been a bit busy lately.

Feel free to comment and suggest whatever you have in mind ❤
Enjoy! 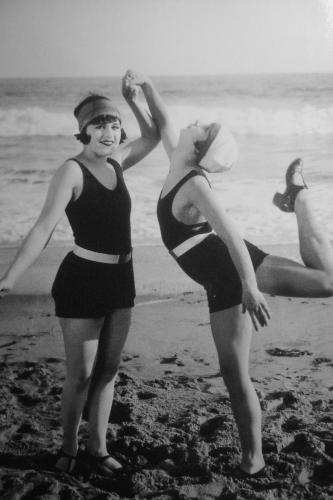 It’s really getting so hot in here. Especially if you live near the beach, which is my case. Summer is that time of the year when you just want to look cute and comfy at the same time wearing dresses and colorful skirts. And what about the swimwear?
I am presenting you all a new series of blog posts about bathing beauties through history. Every week I’ll be posting inspirational photos from the past, each week centered on a specific decade.

This week I am showing you some of pics of beach life in the 1910s.
As you can see on the photographs, in the early 1910s women used to wear large suits that covered their bodies, but later swimsuits were modernized and more daring, especially on young girls, who would coin the term “flapper” later in the 1920s.

This month I’m very busy with work and other personal issues, so you’ll have to forgive my lack of activity in advance! Anyway, I just want to let you know that I am preparing a cool blog post about the tiki look – hopefully it will be up by the end of July!

Summer is that time of the year when you just want to look cute but comfortable at the same time. Living in a country with hot temperatures from June to September is really hard, especially for someone who adores wearing fancy clothes and dresses 24/7. I just picked my essential items for this time of the year. Easy to find, they’ll blow your mind ❤